Developer
Joined 5610 days ago
Last seen 2 days ago
"Foundation" Ships
Posted 1880 days ago
Fighters
The most basic ship type. Small, agile, cheap, but still able to deal a fair amount of damage in large swarms.
Their major drawback is that they can not traverse space on their own, they need a Carrier.

Carriers
The largest ship available in Foundation. Lightly armed, but able to house an absurd amount of fighters to swarm any threat.
They are vulnerable to long-range attacks, such as the artillery cannons mounted on Destroyers. 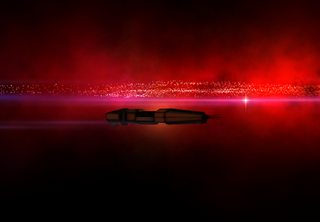 Destroyers
A relatively small ship armed with long range artillery cannons and some light point defenses.
Able to take out larger and slower moving targets with ease, while still able to defend against a small number of fast moving fighters.
They are also the only ship type in Foundation that is able to properly lay siege to planets.

Ship customization
Ship customization is done on a ''per fleet'' basis. For example, all Destroyers in the same fleet will have the same loadout. But you can have two different fleets, with different equipment.
Equipment can be gained from the Fleet Missions.

Fleet missions
A simple system of military missions that require fleets to complete. You find them around your capital system. Simply sending a fleet to the marker will begin the mission.
For now missions are limited to ''Kill the pirates'' style tasks, but more varied and exciting missions will come in the future.

Foundation is still in development, and I am still hoping for a ''late October'' release.
As always, no guaranteed release date until it's actually done.
Support email
Forums > Diary > "Foundation" Ships
Steam Early-access